Interlift 2017 in Augsburg (Germany) was the most successful Interlift in its history, which began in 1991. The trade fair set new records again, with 574 exhibitors and 21,260 visitors. In addition, the trade fair has become more of an international event, with participants from 48 countries and visitors from 97 countries. 92% of the exhibitors rated the fair as ‘satisfactory’ to ‘very good’. It met the expectations of 98% of the visitors. 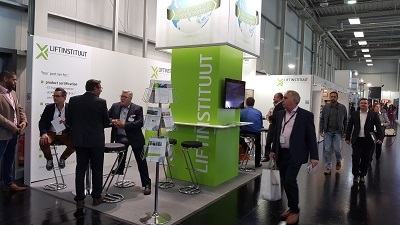 Over the past 25 years, the surface area of the Interlift trade fair has more than quadrupled. To accommodate this increasing growth, a second temporary hall was erected in the courtyard, just like in 2015. Only bigger. And mainly occupied by Wittur.

Lots to see, lots to hear

Even though the primary focus was on displaying existing products adapted to the new standard EN 81-20, a visit to Interlift was well worth the effort in 2017 as well. Partly because this trade fair offers an easy way to meet a lot of colleagues in the business. New contacts are made and existing ties are reinforced. But there were also some interesting new products. If you paid attention to them. A few things that caught my eye are described in this article. There are also a few photos of the trade fair to give those who did not travel to Germany an idea of what was on show. 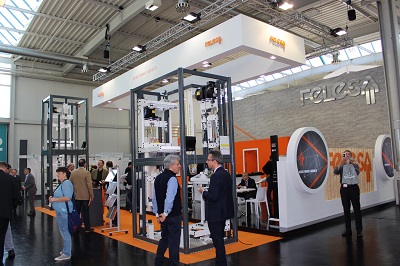 ‘Smart Maintenance’ is a strong growth area at the moment, and that makes sense. By performing maintenance on the basis of the usage frequency of an elevator and making use of information on the condition of that elevator, you do no more than is strictly necessary. And this is the goal that elevator maintenance companies are pursuing due to pressure on maintenance tariffs. You also prevent faults and downtime because an impending deficiency or fault is signaled by, say, vibrations or abnormal door opening and closing times.

Originally, elevator data would be read off the controller by the manufacturers which also took care of maintenance and retrieved via the IP address of the two-way audio linked to the elevator. ‘Connexion’ from KONE and ‘Servitel’ from Schindler were examples of this. Brand-independent controller suppliers like Böhnke + Partner and Köhlmorgen also developed equivalent systems for brand-independent elevator maintenance companies. These elevator maintenance companies and later also manufacturers who, through invitations to tender, had to perform maintenance on each other’s elevators began to make use of services and equipment from companies such as EDNL and Modusystem to gain access to elevator data in the protected controllers of the big brands. However, an entirely new approach is emerging. Usage data are not accessed from the elevator controllers but by installing external measuring equipment on the elevator cage that provides access to the usage data via the cloud. KONE is now attempting to roll out this system in Europe for all the elevators that it maintains. For third-party elevators but also for its own elevators with or without the ‘Connexion’ monitoring system. German company Henning also worked in parallel on a broadly comparable system and presented that during Interlift. This genuine innovation could well provide a huge boost to ‘Smart Maintenance’ as anyone can perform maintenance on any elevator according to this principle without the hassle of accessing protected data in the elevator controller. 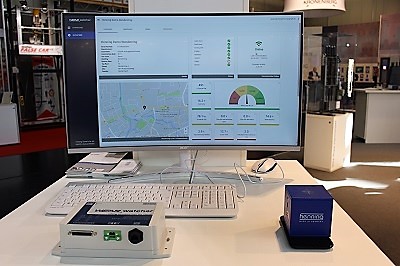 In the area of suspension devices (carrying cables and belts) there were no new developments on show. Belts like those used by Otis can now be used more broadly, as can the plastic-coated steel cables which Orona was one of the first to bring out. It turned out in practice with the latter suspension devices that 100% alignment between the traction sheave and the diversion wheels is necessary, otherwise the plastic sleeve soon gets damaged. Excessive wear on carrying cables can also be caused by unequal tension in the carrying cables. Springs or rubber elements on the counterweight side do not always work adequately. Both Henning and Vertima GmbH have designed a hydraulic system for this that ensures that the tension in all carrying cables is equal at all times, which guarantees that the service life of the carrying cables is as long as possible.

GMV, Algi, Bucher and Hydroware, all of them familiar faces at this trade fair, were back with ‘greener’ hydraulic elevators and components. Hydraulic systems are still popular in apartments with a small number of stories and also in home elevators. Partly because of the price. And many existing hydraulic elevators are modernized with more energy-efficient components rather than replaced by traction elevators.

There were a lot of home elevators and elevators for the disabled. It would appear that they are in great demand. There was the necessary difference in price and quality. 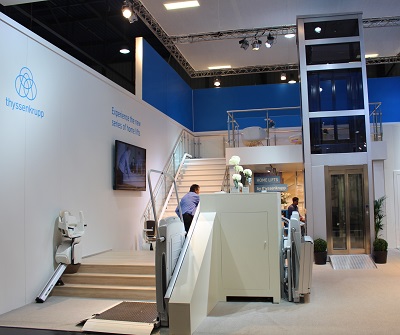 There was a particularly strong showing from manufacturers that supply complete elevators to elevator installation companies. Orona, Mac Puarsa and Kleemann, for example, had large stands where elevator installers from all over the world were indulged with delicious snacks and drinks. Wittur, perhaps the biggest supplier of complete elevators and components, had its own hall in the courtyard. You will not find elevator manufacturers like KONE, OTIS, Schindler, ThyssenKrupp and Mitsubishi at Interlift. They only supply directly to the end customer rather than via elevator installation companies.

Liftinstituut has been taking part in Interlift for years. As a Notified Body, Liftinstituut has been certifying elevators and elevator components since the introduction of European Directives. So, you have to be visible on the international stage. For manufacturers as your customers, but also for installers as their customers. Interlift is one of those occasions. And Liftinstituut was visible. Our own stand attracted many international visitors. In addition, the necessary certificates were handed out and the signs ‘Certified by Liftinstituut’ were on display everywhere.